Is Your Teen a Tech Addict? Here’s How to Tell And What to Do About It.

Parenting teenagers is never an easy venture, but a new survey of parents reveal that the digital age is bringing forth challenges that many simply don’t know how to navigate.

“It’s like you’re dealing with a junkie when it’s taken away from them,” said one frustrated parent.

Our recent teens and technology survey, which polled more than 871 parents, sought to investigate:  What most worries parents about their kid growing up in the digital age and what can be done in trying to set healthy limits. 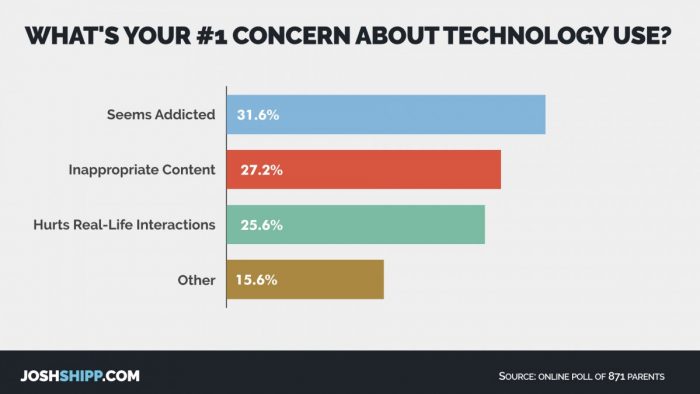 More than 31 percent of parents responded that they have seen evidence that their teen is unable to self-regulate in the area of media consumption. Parents frequently commented that their teen seems “unable to unplug” or showed signs of “tech addiction.”

“Parents have legitimate reason for concern,” claims Dr. Lisa Strohman a clinical psychologist who specilizes in technology wellness, “research now shows us that the brain images of a technology addict—someone that routinely spends more than 8 hours a day online mostly chatting with friends, playing games and posting to social media— when compared to the brain images of a drug addict…the parallel in damage is indisputable.”

Additionally, parents are alarmed at the sheer amount of pornographic material on the internet and the effect that could have on their teen’s developing sense of themselves and healthy relationships.  Again, the research supported their instincts – they were right to be concerned.

According to a study done by the University of Nebraska and presented to the American Psychological Association in August of 2017, the average age of a teenage boy’s first exposure to pornography was 13 years old.

“HE VALUES THE SCREEN MORE THAN REAL PEOPLE”

More than a quarter of adults responding said that they have seen evidence that online time is eroding their teen’s social skills and ability to actually interact with real people.

In her research, Twenge notes that teenagers today are dramatically less likely to hang out with friends without their parents. The shift is stunning. 12th-graders in 2015 were going out less often than eighth-graders did as recently as 2009.

Parents in our survey repeatedly said they worry that the interaction with technology will affect their teen’s ability to flourish in the workforce, with important friendships, and in future relationships.

“Young people have more connectivity than ever — and far less connectedness to others and to the world. Not only are they disconnected in the moment, but this focus on devices can hinder their development of the social skills needed to communicate with others in-person.” 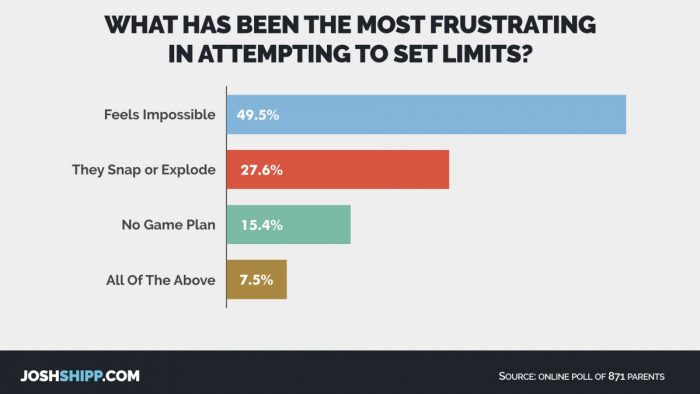 “IT FEELS IMPOSSIBLE TO STAY ONE STEP AHEAD OF THEM”

By far the largest frustration for parents regarding their teenagers and technology was an overwhelming feeling of powerlessness, with nearly half of all parents surveyed saying this was their number one frustration.

“Technology is such an ubiquitous and overwhelming social force, I feel powerless trying to regulate it,” one parent wrote.

But beyond that, many parents also expressed an edge of frustration because schools – in their desire to teach technology and move toward efficiency – are requiring increased interactions with screens. This makes it harder to enforce the rules at home. They say they’re doing homework, yet  parents repeatedly catch them watching mindless content on YouTube.

“Are schools inadvertently fostering teen’s addiction to screens?” one parent asked.  “Because it feels like we’ve created a monster.”

“EVEN DISCUSSING IT WITH THEM CAUSES HUGE FIGHTS”
Many parents said that the most difficult aspect of parenting was dealing with severe resistance from their teens when they do attempt to set firm boundaries. Roughly 27.6 percent of parents said that fights and angry outbursts from their teen over the issue of technology use created a tense and contentious home environment that wasn’t pleasant for anyone.

“We fight over this stuff all the time, and I am afraid this is degrading my relationship with them,” said one parent.  Other parents chimed in, saying that constant fights, defiance and even hysterical fits sapped their parental will.

Many parents were quick to acknowledge their role in this messy situation.

“I am inconsistent in my enforcement of technology rules, and sometimes even hypocritical,” one parent said.  “They catch me breaking the rules I set for them, and I have nothing to say in reply.”

Some parents said that part of the tension comes when they are not on the same page with their spouse or partner over the seriousness of the issue, or what the house rules about technology should be.  Others admitted to taking the easy way out.

“I gotta be honest,” one parent wrote.  “Sometimes, it’s just easier to let them go on screens because then I get time to myself.”

Dave Anderson who hosts digital citizenship workshops at schools says, “We’ve seen positive results when an entire family commits to tracking both their time and activity in front of a screen each day. This collaborative approach leads to more intentional time online, and promotes open dialogue between parents and kids about technology.”

SPOTTING TECH ADDICTION & WHAT YOU CAN DO:

Dr. Gene Beresin, executive director of The Clay Center for Young Healthy Minds at Massachusetts General Hospital and a professor of psychiatry at Harvard Medical School, says that technology is dangerous when it interrupts or distracts from a teenager’s most important priorities, which should be (in no particular order):

Use the list above as a sort of diagnostic checklist. How is your teen doing with these things?

Chances are, if your teen is doing well at all six, they don’t have enough spare time to be addicted to screens. But if those six aren’t going well, here are two simple rules you can implement to help things along.

RULE #1: DEVICES HAVE A BEDTIME, TOO
Pick a time (we suggest 9pm or earlier) when all devices – computers, laptops, iPads, phones, video consoles, etc) get turned off.  Let your teen know in advance, and if possible, have a discussion and put this plan in writing (forming a tech contract for the family).  Let your teen know this is binding for all family members, including you.  Remember: the right to a cell phone is not a constitutional right.

TRUST LEVEL = HIGH
If you trust your teens, put all devices at a charging station that you designate.  Maybe it’s in the den, or a home office.  This only works if you think your teen won’t sneak into that room to get their device at night.

TRUST LEVEL = MEDIUM
Use a device to shut off your WiFi at the certain time.  Google WiFi and CIRCLE are tech solutions that allow you to do this.

TRUST LEVEL = LOW
Collect all devices and keep them in your room.  If you have to, unplug the router and bring it into your bedroom.  Yes, it’s a hassle and savage.  But then, sometimes you have to be savage.

RULE #2: DON’T BE A “TOGETHER ALONE” FAMILY
Establish this as a clear value: we will not be the kind of family where everyone is in the same room, but all on separate devices.  To help make this value stick:

It’s easy to get discouraged when you see your teens stuck in a cycle of unhealthy technology use, but it’s important to try to stay calm, confident, and positive.

Staying calm sets the tone for respectful interaction around technology use and limits. There will of course be resistance, which is exactly why we need to bring calm to bear on the situation.

But we also have to remember that being calm does not mean being passive. Parents need to feel confident in their rules and see through on enforcing them. This can lead to difficult interactions, but maintaining a healthy sense of parental authority in the home is ultimately what’s best for everybody.

And lastly, it’s critical to stay positive. Sure there will be setbacks, but if we maintain a positive outlook, we can take them as feedback about what we can do differently and better.

If we do these three things consistently, technology can be tamed.