Write Memorable Quotes that Get Shared

You want to write it on a sticky note and post it on your mirror.
Or print it on a T-shirt and sell it on Etsy.

But most quotes are NOT memorable.

Sure, I’ll smile at an inspirational statement slapped on top of a sunset or an ocean wave or a kitten. In fact, if you were to put a quote on top of all three, I’d click “share” until my fingers bled. Ahem… 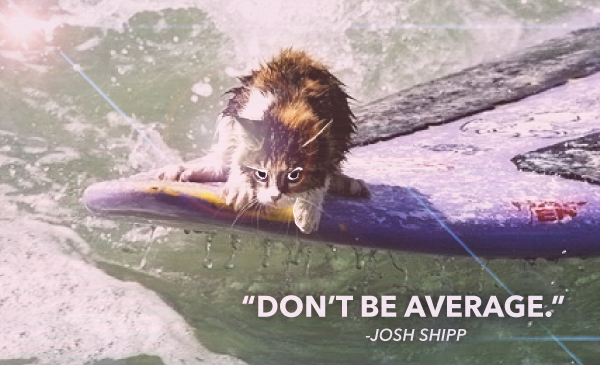 And as communicators of all types, we want BOTH.

I’ve been nerding out on what exactly makes a quote both memorable AND shareable after having a few get 1M+ shares. 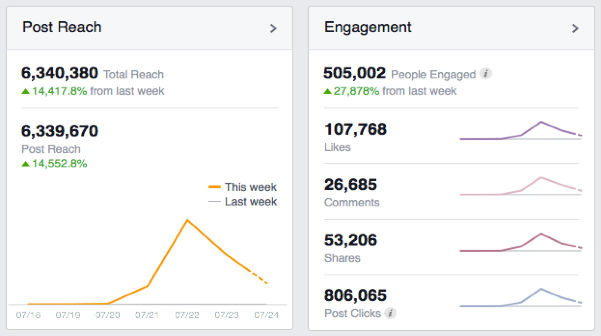 (Screenshot of my Facebook page insights following the quote)

I knew the quotes were strong but I hadn’t thought they’d resonate so widely. Especially since (ahem…full disclosure here) I’ve created quotes in the past I thought were guaranteed “greats” but totally bombed.

When it comes to crafting a powerful, shareable quote it’s critical to get clear on two things:

1. WHY your BIG idea MUST get boiled down to a tweetable truth.

2. HOW to boil it down with a step-by-step process.

Now, let’s get into the WHY and HOW of crafting great quotes.

THE WHY: CAN 17 WORDS REALLY BRING A NATION TOGETHER?

Picture traveling back in time to your high school history class. Imagine a room filled with the musty smell of chalk and the sound of creaking desks.

(Recalling high school makes me queasy, too. We won’t be here long.)

On January 20, 1961, John F Kennedy was sworn in as President of the United States. He took office at a very tense moment in American history.

It was the height of the Cold War and every leading nation in the world was racing to ensure military superiority over everyone else. Relationships between political superpowers had reached a boiling point and the general public was terrified. Nuclear war seemed imminent.

JFK felt Americans needed fresh perspective on the challenges at hand as well as some clarity about why their individual choices mattered.

So working with his speechwriter, Ted Sorenson, JFK took an unconventional approach in his inauguration speech. Rather than promising the public a reward for sacrificing their resources on behalf of the country (as was expected), JFK instead called them to action. (source: NY Times)

The quote struck a nerve. It got people thinking and acting differently. Fear and suspicion transformed into courage and generosity. People started giving more, serving more, and sharing resources with those in need.

In short, the quote brought a nation together.

Not too shabby for 17 words.

There are countless examples of tide-turning quotes, but here’s my point: A few, well-chosen words can make a dent.

That’s why it’s critical you intentionally shape your key ideas into crystal-clear, memorable, repeatable quotes. Because your words have the power to make someone’s life better.

With that in mind, let’s talk about HOW to write memorable quotes.

THE HOW: 5-PRACTICAL STEPS TO WRITE MEMORABLE QUOTES

The art of crafting powerful, shareable quotes is as simple (and frustrating) as any other creative venture. It involves just a few basic steps and then A WHOLE LOT of revising. So don’t worry if you’re first draft isn’t quote-gold. It won’t be.

Quote-gold lies at the end of the 5-Step Rainbow.

“Every kid is ONE caring adult away from being a success story.”

“I wholeheartedly believe that every at-risk teen could be just ONE mentor away from being transformed into a success story.”

Make a list of things that move you to the core. They need to come from the YOU that doesn’t care what people think and just wants to serve people in some way. Here’s some of the themes I identified early on:

What do you want your audience to think, feel, or DO? That end goal will drive the wording and imagery you use. After a lot brainstorming, I came up with this:

I want adults to understand they have the opportunity to positively and permanently change a kid’s life just by spending quality time with them.

With some clarity about your THEME and your GOAL, start by generating no less than 10 drafts.

A few examples from my long list of first drafts:

Now that you’ve got a long list of ideas, it’s time to run them through what I call the “Quote Diagnostics ” which consists of 3 simple questions that will ensure your quote is memorable.

A quote should stand on its own with zero additional context required.

WEAK: “If you want to be a level 7 leader like Betty, you’ve got to P.U.S.H. through fear.” –Example

My early iterations referenced material that the majority of people wouldn’t know. I had to make it more universal. So I cut out the fat like this:

“ – every at-risk teen needs at least one caring adult to be a success.”

A great quote is bold and draws a line in the sand. A weak quote doesn’t force you to choose – it just dishes out syrupy sentiments.

WEAK: “Some – not all, of course – leaders who can’t be questioned might do questionable things. Doesn’t mean they aren’t a good person, it probably just means they weren’t thinking clearly.” –Example

My quote lacked that definitive edge, so I replaced “needs at least” with “IS”:

“Every at-risk teen IS one caring adult away from success.”

For your audience to share your quote, they need YOU to put words to what they feel.

They need to feel like they’d say the same thing you’re saying if only they’d thought of it. Look for responses like these: 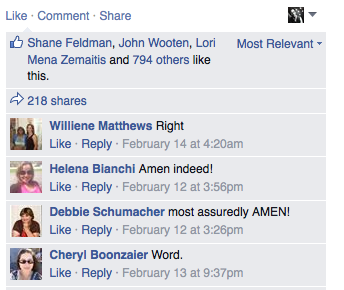 As I braved the interwebs to gather feedback, I tested a few versions. I alternated between “at-risk” and “troubled” to see what hit hardest.

Also, I wasn’t sure that the word “success” was clear. Did I mean they’d be rich and famous? “Success story” seemed to get more at the heart of it.

What kind of feedback should you look for?

1. ONLINE: test a few different versions of your quote. Which version gets the most traction, shares, or comments? Pay close attention to what people say, add, or misinterpret. Ex: Readers of that first Tweet jump all over the “troubled” qualifier and pointed out that EVERY young person needs a caring adult – not just troubled or “at-risk” ones. And not just TEENS. Every KID.

2. IN PERSON: test the phrase in a speech, meeting, or conversation with friends. Look for head nods or smiles. Listen for laughter, gasps, or “hmm”s. Body language will speak volumes about whether or not your quote resonates.

3. ORIGINALITY: Make sure to google your quote to confirm it’s original. If someone got there first, don’t be discouraged! That means you’re on to something that others resonate with. Consider how you can put your spin on the idea and publish something original.

Which lead to the FINAL product:

“Every kid is ONE caring adult away from being a success STORY.”

It’s time for YOUR message to be heard above the din of cat poster-noise. I want YOU to start crafting quotes that will move your audience to action, get you kudos for your insight, and amplify your reach.