Statistically, I am supposed to be dead, in jail, or homeless.

At 14, I’d been kicked out of so many foster homes that it became a game to me. I acted out because I didn’t trust anyone, and I didn’t expect that to change any time soon.

So, how come I didn’t end up yet another statistic?

The Answer: One Caring Adult.

“Every Kid Is ONE Caring Adult Away from Being a Success Story.”

How Anyone Can Become a Youth Advocate

1. Identify One Kid, and Consistently & Intentionally Invest Time With Them.

In March 2015, Harvard’s Center on the Developing Child released a study saying, “Every child who winds up doing well has had at least one stable and committed relationship with a supportive adult.”

Maybe this child is 8 and on your baseball team. Maybe she’s your 13-year-old daughter. Maybe he’s 15 and lives in your neighborhood. Whoever it may be, you have the power to make a positive and significant difference in their lives.

All you have to do is…

Step 1: Find out what they’re into.
Step 2: Spend time doing what matters to them because they matter to you.

If you’re interested in mentoring or becoming a youth advocate, here are some resources:

Consider this. Kids spell TRUST like T-I-M-E. And when you consistently invest time in a kid–even if they’re acting out and you don’t think they deserve it–the care and attention will pay off.

When I was a kid, I felt like I had no one to talk to about these crazy, scary things going on in my life. So I acted out. And I took it out on the very people who were trying to help me. But after a while, I realized–for the first time–my current foster parents weren’t turning me away, and they genuinely cared about my future.

Even then, I didn’t thank my foster parents until I was in my twenties. Know that you ARE making a difference. It’s just that, sometimes, us kids are too immature or scared to tell you so.

3. Let Them Know You See Their Potential.

“You’re not a problem. You’re an opportunity.”

That’s what my foster dad, Rodney, told me. And it put me on the path I’m still on today.

Your kid may keep causing problems and trying to make things difficult.

Remember this: When kids don’t talk out, they will act out.

Be a youth advocate – that person who changes a kid’s life with a simple, caring act. It starts with you, and it starts now. 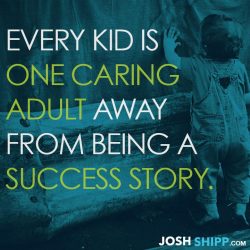